Showing posts from August, 2013
Show All

The Harder They Come Remastered Wishing to become a successful Reggae singer, a young Jamaican man finds himself tied to corrupt record producers and drug pushers.  Marking its 40th anniversary on September the fifth a digitally remastered edition of this groundbreaking movie will be in theaters for only that one night. Jamaica's first feature film, The Harder They Come, was released in 1972 . The film introduced to the world, not only Jamaica, but also Reggae music. It propelled Jimmy Cliff to international stardom. The film was made by Jamaica's great filmmaker Perry Henzell who passed away in 2006. Movie Specs: The Harder They Come 1972. 103 min. Color. Jamaica. English/Creole and Pidgins. Genre: Crime/Drama/Music. Director: Perry Henzell. **** Cinema City On Biutiful From the director of Babel, 21 Grams and Amores Perros  Any one who viewed this movie would be tempted to correlate its name with the masterpiece by Sam Mendes American
Post a Comment
Continue reading>> 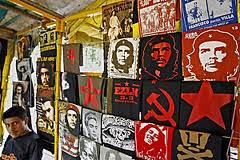 The Motorcycle Diaries "The image of Che Guevara before he became a revolutionary symbol." Original article by: Elnour Hamad* Some may share my opinion that Hollywood has lost a lot of its old humane artistic outpour which marked the sixties, seventies and perhaps the eighties of last century. It has become rare for one to watch a movie based on a significantly deep literary work. The film industry has been inclined more and more towards films that generate greater income. Hence the abundance of violence and crime movies which popularize the use of new cinematic tricks launched by the graphic revolution in computer sciences, especially the so-called materialization or "virtual reality". The whole thing has been turned to leisure and entertainment, and what was prevalent before, such as the use of drama in education or enlightenment or in strengthening of human dispositions, has declined. However, there are producers and directors in Hollywood who still i
Post a Comment
Continue reading>>
More posts